In an interview widely reported today, the American novelist, Jonathan Franzen, reveals his preference for the pbook (the physical book) as opposed to the ebook. He comments: "Maybe nobody will care about printed books 50 years from now, but I do. When I read a book, I’m handling a specific object in a specific time and place. The fact that when I take the book off the shelf it still says the same thing - that’s reassuring. Someone worked really hard to make the language just right, just the way they wanted it. They were so sure of it that they printed it in ink, on paper. A screen always feels like we could delete that, change that, move it around. So for a literature-crazed person like me, it’s just not permanent enough” (http://www.telegraph.co.uk/culture/hay-festival/9047981/Jonathan-Franzen-e-books-are-damaging-society.html?utm_source=dlvr.it&utm_medium=twitter). Here, Franzen seems to suggest that the literary afficionado functions best through the printed book, particularly because of its place in time and place (close to how Walter Benjamin describes 'aura'). But, contrary to Franzen's belief in the fragility and impermanence of the digital medium, Matt Kirschenbaum, and others, have concluded that the digital--in each individual instantiation of a 'text'--is as permanent or 'fixed', as 'fixable', as anything printed (see Kirschenbaum's Mechanisms: New Media and the Forensic Imagination [MIT Press, 2007]).

This may well, at the level of the byte, say, be true, but it is also to assume, as Franzen does here, that print itself is unchanging, irrevocably the same each time the printed book is encountered. This cannot be true, particularly with regard to a book's materiality which inevitably degrades, or is altered through being handled, or collects dust. For the 'text' itself (which I would regard as inseparable from the artefact's materiality)--widely understood as the words or images on the page--these change, of course. They change from imprint to imprint and from edition to edition, even if only through an updated paratext, a newly designed cover, the emendation of an earlier error, or, on a grander scale, multiple editorial interventions.

The distinction between the digital and the physical artefact ('analogue') as a distinction between the transient and the fixed, the impermanent and the stable, the immaterial and the material is not a useful one. And, just a reminder for all the post-1500 readers: it is through a detailed understanding of manuscript culture that one might better understand the nature of TEXT in its broadest sense. It is there that the idea of the eventful text is most easily investigated and analysed and there that the efforts to make human endeavour permanent can most clearly and poignantly be seen. 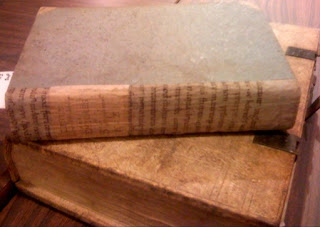 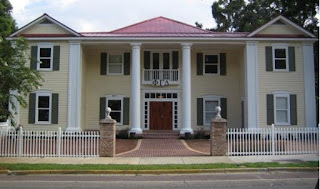 An examination of heterotextuality proves that not all texts are born equal. Looking at all manner of texts--from 'Exit' signs to chalk graffiti, a sorority house to a bulletin board--it's clear that what links these texts is the intention to communicate; other attributes are variable. The building, the sorority house with its colonial architecture and Greek identifier, is replete with institutional authority, its academic credentials emblazoned across its facade; but it also shares a larger, national and ideological function, allied to all other sorority houses of its type (and, every sorority house, of course). The bulletin board, outside a room housing a writing centre, is also institutionally authorised, both reflecting and contributing to the university's identity and purpose. It also shares an important feature in common with the chalk graffiti (wittily and exclusively referencing the BBC Sherlock Holmes series); namely, its transience and ephemeral nature. In this, even though the bulletin board functions as an institutional sign like the 'Exit' notice screwed into the ceiling, the latter is made different through its permanence and legal mandate. All of these texts can be examined through their intentionality, materiality and functionality (as I've just done), but it's the extra (literally 'outside') variable--their value, 'aura', authenticity--that adds the essential feature of Text. How are these examples to be valued? Clearly very different values come into play: the financial (real estate prices), the legal (how to get out of the building in the case of a fire), the aesthetic (the graffiti, the sorority house. For some, the aesthetic appeal of graffiti is non-existent.). What about the ineffability of value, though? So-called 'sentimental value'? The visceral response to a worn-out old notebook? This becomes Text-beyond-price. This is the core of Text that can never be reproduced in any other medium. 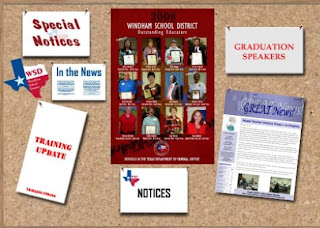 Posted by Elaine Treharne at 8:05 AM No comments:

The Invisible Aspect of Text

Walter Benjamin's 'Work of Art in the Age of Mechanical Reproduction' is, rightly, one of the most important articles in the modern era, particularly for its aesthetic approach to Text. If Text is interpretable through its intentionality, materiality and functionality (more capacious descriptions than the alternative triad--'production, transmission and reception'), the missing element, and often the most significant element, is 'aura'. 'Aura' is notoriously difficult to pin down, but might, variously, be thought of as 'authenticity', 'originality', 'value', 'appeal', 'authority'. For Benjamin, loss of 'aura' emerges from reproduction, though the democratisation of art, for him, had great benefits. The essence of Text, then, is its irremovable intent, material, and function, but always weighted by the variable of 'aura'. 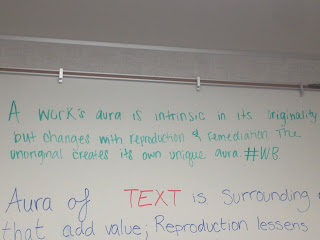 Here, from sixty minutes' hard work, are the two classroom boards with tweetable reductions of Benjamin's fundamental message, completed by the teams of my 'What is (a) Text' Senior Seminar. 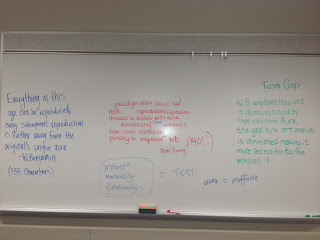 Posted by Elaine Treharne at 7:24 PM No comments: 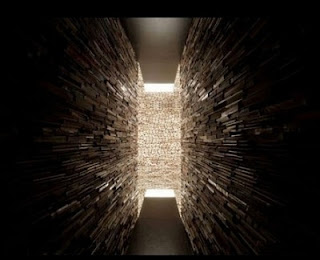 Is it possible to conceive of Text holistically? By 'Text' I mean the textual artefact, the thing requiring interpretation. If we can conceive of a house as a whole entity, despite its many components and multiple rooms, is it not reasonable to think of a textual artefact as a single edifice of interpretability: an edifice of letters/symbols/readings? Through various optical illusions, Matej Krén has created a building made out of books (http://freshbump.com/matej-kr-n-s-building-of-books/); extending that sculpture into a metaphor to envisage a single edifice constructed from a Text's component parts might allow us to investigate the full potential of individual textness. A case in point would be the well-known St Alban's Psalter, which is digitally available here (http://www.abdn.ac.uk/~lib399/), but only in a dismembered, folio-by-folio, click-by click viewing. This presentation is much better than no images, of course, but it encourages the breaking apart of the volume into its constituent parts--either the page-at-a-time technique (and no physical book ever functioned a page at a time) or through the verbal text or through the illustrative text (which in the case of this Psalter are often inseparable). The book becomes the patchy reconstitution of its parts and not the sum of its parts: its materiality, its textual history, its paradigmatic and syntagmatic relationships, its context of production, and so forth. If a book were a building, a unified whole understood as such, one would enter and walk through it, seeing all elements as part of the singular textual object replete with its own history and intertextuality, made more complex by the intellectual information of its particular inhabitant. Could such a thing ever work? If it could, we would have a new Text: the whole Text, and, I might argue, the only genuinely interpretful Text.
Posted by Elaine Treharne at 5:24 PM No comments:

What is (a) Text? TEXT is a semantic field of extraordinary range; boundariless; exceptionally difficult to define. The OED provides a narrow initial definition as its 1a) 'The wording of anything written or printed; the structure formed by the words in their order; the very words, phrases, and sentences as written'. Multiple other definitions refine this, particularly with regard to semantic specialisation: 'text' as 'scripture', the 'very words' of 'holy scripture', but it's clear that none of these definitions is sufficient to account for textness in a holistic sense. By this, I mean contemplating 'text' as a whole, without subdividing it into components like 'word', 'image', 'margin'. How can we talk about The Ellesmere Chaucer as a text (an object replete with intentionality, materiality and functionality) using the narrowness of this definition? How can we discuss the codex's meaning, including its value as a contemporary witness to Chaucer's work? ('Meaning' itself is circuitously defined by the OED (2.) as 'The sense or signification of a word, sentence, etc. a. Of language, a sentence, word, text, etc.: signification, sense.') 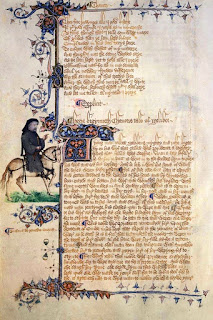 TEXT might most usefully include all of the areas of investigation incorporated into Peter Barry's Literature in Contexts (http://us.macmillan.com/literatureincontexts/PeterBarry). For Barry, these integral elements of textuality include epitextuality, peritextuality, metatextuality, cotextuality, and so forth, all of which, combined provide 'total textuality'. We might think, then, of the Ellesmere Chaucer, of the Beatles' 'A Day in the Life', of Walt Whitman's Leaves of Grass as 'pantexts' or 'omnitext' (a term coined by Taylor Field), each a rich repository of interpretative potential yielded by its creation, transmission and reception and enhanced by its value in the larger world.
Posted by Elaine Treharne at 5:49 PM 1 comment:

Twit Twit To Who?

What an interesting and perplexing medium Twitter is. For the everyday humdrum tweets (few of which I subscribe to), I'm sure it's random and sporadically amusing; for celebrity updates, no doubt it feeds the frenzy of interest in mundane comings and goings (frequently screenshotted into newspaper articles); for news reports, it's a useful tool, but much of what's reported barely merits attention.

For academic goings-on, it's a weird new world, pertinently discussed by Jeffrey Jerome Cohen in his blog today: http://www.inthemedievalmiddle.com/ What's fascinating is how much of a driver Twitter is, or might become, rather than being a reporting or proclamatory tool. The debate I've been having with Jeffrey concerns issues of intellectual property and Twitter. Is it ethical to tweet almost point-by-point a conference paper that you're listening to? It would be, if you've asked permission of the speaker, presumably. And while you wouldn't ask permission to take notes in a notebook or a MacBook, you would ask for permission to record digitally or to video. So tweeting is like recording, rather than note-taking? And it's like recording because it's a public or publishable form, infinitely replicable through endless repeating or retweeting? If that's the case--that speakers can expect to be published even as they speak--surely that might change the nature of a conference paper? Jeffrey's blog discusses the utility of tweeting, particularly as his conference papers might be almost ready to be published. Mine seldom are: they are usually highly speculative, sometimes deliberately polemical to garner response, often quite embryonic and seeking feedback. Should I cease that type of early research presentation? Such work is not ready for (written, permanent) publication--nowhere near, in fact. If it isn't ready for that, then is it really a viable tweet-hoard?
Posted by Elaine Treharne at 7:43 AM 2 comments: