Today, in the midst of a thunderous downpour, we examined Florida State University's Dodd Hall as an example of text: 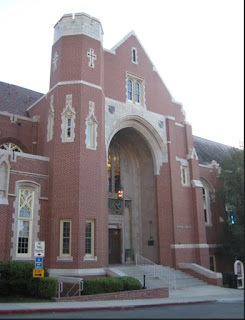 Built in the late 1920s, this 'gothic collegiate' building now houses Classics, Religion and Philosophy, together with the FSU Heritage Museum. Inscribed over the doorway in Gothic-style letter-forms is an unattributed quotation: 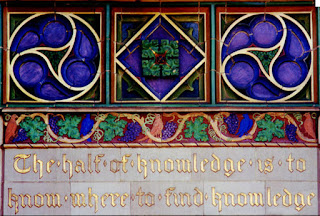 It's clear, then, from these public words that this building belongs--ideologically, architecturally, and contextually--to an institution of learning. But is it (a) Text? We had a long discussion about the building's textness and its dominant features: its cathedral-like appearance, indicating the reverence with which we should approach these buildings (and their being off-bounds to those who don't belong?); its red brick, FSU-style, corporate identity. It is also a building that, like a chapter of a book, belongs to something much larger than itself: one instance of its co-textual (or syntagmatic) relationship with other 'legacy' buildings on campus is its place as #8 on the list of Legacy Walk things-to-see. These are the markers and buildings that remind onlookers and participants of the history of FSU and those who have passed-through its doors (http://www.fsu.edu/~legacy/).

Of most concern in reading this building as Text, though, was its intentionality. If the architect built this building as a library, and wasn't concerned with some larger meaning (no 'intentionality'), then does meaning inhere in it at all? Is it a text if Text = meaning? Well, rather like the adaptive reuse of medieval buildings in modern contexts, its meaning changes, and the onus of textness is on the reader (back to Barthes!), rather than the object itself. The text means something different to each participant; that is, text is necessarily subjective. As such, this building we pass on most days takes on a textual complexity that is performative, eventful, and unstable. We might wonder, then, if all Text, at all times, is ultimately unstable?
Posted by Elaine Treharne at 4:52 PM No comments: