British Medieval manuscripts, many of which survived centuries of neglect, adaptive reuse after the emergence of print, and the trauma of the Reformation, also had to contend with the particular attentions of the scrap-booker and collector of initials until very recently. Now that many repositories are putting their collections freely online, it's possible to see some of the damage done to manuscripts that are among the most aesthetically elaborate and commercially desirable.

Missing from the Salisbury Psalter folio pictured above is an enormous, probably historiated initial I (Iubilate is the opening word of Psalm 100 [99] here). A possible reason that that initial was removed--along with many, many others in this manuscript--is that it contained a human being as its decorative design. It was most likely similar to this one that survived the knife:

The relatively careful removal of the single figure at Psalm 100 belies much more hurried cutting that sought to remove an initial of interest quickly, but simultaneously removed chunks of text or damaged other folios, like this, also in the Salisbury Psalter: 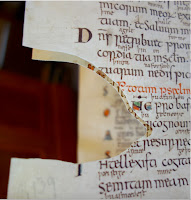