To quote an old favourite, 'a text is not a line of words releasing a single "theological" meaning (the "message of the Author-God") but a multi-dimensional space in which a variety of writings, none of them original, blend and clash' (Roland Barthes, 'The Death of the Author', Image, Music Text, p. 146 [here: www.tbook.constantvzw.org/wp-content/death_authorbarthes.pdf]). Barthes' article, and a great deal of subsequent agonizing by critics, places the author in the background and the onus on the reader. I don't agree with Barthes's view, but this quotation alone provides us with a theory that can work well for determining the nature of every text, including those where authorship is the key element of textness (such as Dickinson, Shakespeare, and even Kurt Cobain's Journal); the theory is that of Text as 'multi-dimensional space'. We already know a text 'is not a line of words'; it is anything where there is an intention of meaningful communication. Within the space of Text, conceived of as cogently as possible, all components of Text exist simultaneously.

The multi-dimensional space of textual fulfilment is a literal and metaphorical space: literal, in the sense that one might gather up every instantiation of an individual set of text (all editions, all performances, all the epitextual material belonging, for example, to Moby Dick) into one space; metaphorical, because this space can incorporate all of a text's potential for interpretation, including the tricky issue of what we've been--rather dead-endingly--calling 'aura' (after Benjamin). Perhaps if we imagined this space as a pyramid


we'd be able to hierarchise our textual components, too, so that the dominant textual element could rise to the pinnacle. For some magazines, it might be their ephemeral nature; their lack of authorship per se; their time-boundedness. For oral text, it would be the transience or paratextuality or immediacy. For Dickinson, it would be 'AUTHORity'.

What Barthes's 'multi-dimensional space' permits, even though this wasn't his intention, presumably, is the conceptualisation of textual fulfilment. Hovering within this space is Benjamin's (impossible?) aura, though this is negligible in some texts' case, and absolutely dominant in others. Perhaps 'aura' can be replaced with 'textual celebrity', 'textual notoriety': simply another element of textness, appended to Context or Epitext?
Posted by Elaine Treharne at 7:15 AM No comments:

Textual Fulfilment. Using most of Peter Barry's textual categories--cotext, context, multitext, epitext, peritext, and so on (see Barry, 'Rethinking Textuality in Literary Studies Today', Literature Compass 7. 11 [November 2010], pp. 999-1008 [DOI: 10.1111/j.1741-4113.2010.00758.x])--it is possible to analyse TEXT as the superordinate of a semantic field. Barry's terms, like the branches of a family tree, emerge from the superordinate and create a set of methods for approaching textual fulfilment. But, like further offspring, categories of 'textness'--the written word, the spoken word, the image-text, the digital text--can either be grouped together under each of Barry's sets, or, can form whole new branches of their own. In an act of Divergent Thinking, my students have been engaged in designing mind-maps for text that permit a glance into the potential for interpreting text in all its fullness.  Here's a snippet of one: 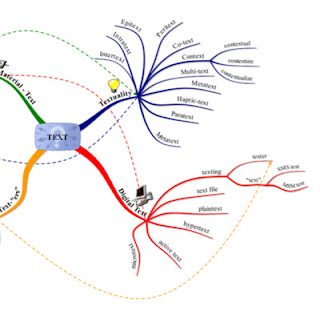 Textual Priorities. What is also becoming clear through detailed analysis is that different authors+text can be allied, because of particular shared elements of 'textness' that emerge from close study of them. It's probably obvious, but Shakespeare and Walt Whitman (apparently sometimes called 'America's Shakespeare', which is a bit sad: why can't he just be America's Whitman?) share the numinous textual element of 'authorial fetishization'. This might, perhaps, be akin to visceral 'aura', something that we have been trying, unsuccessfully, to pin down, though Kendall O'Brien's 'experience' is an astute attempt at definition.

Textual Sifting. Of most significance with these authors, and others who are similarly a permanent part of the canon, it is their being THE author that, in a sense, surpasses even their literary oeuvres: oeuvres with all the attendant problems of 'what is the text' of Leaves of Grass or The Merchant of Venice? In these case, and others like them--Beowulf, Chaucer, Milton perhaps, Dickinson--the overwhelming priority in terms of 'textness' is the cult of the author. Clearly, in the case of Beowulf, the cult of the author means the cult of 'Anonymous', and I think that while we'd all like to know the date of that poem, no one wants to know who might feasibly be called the author/s, because part of its cult is its unknowability, its lack of compositional and authorial context. Not all works share the priority of Authorship (or Intentionality), though: more of those next time.
Posted by Elaine Treharne at 5:42 PM 1 comment: