Variations on the Theme of Grendel's Mere

In our 'Beowulf from Then 'til Now' course here at Stanford, we're having a super time looking at multiple manifestations of the poem/text/concept called 'Beowulf'. We're looking closely at the description of Grendel's Mere at lines 1357b-1372, and shall (we hope) film this scene at the San Andreas Fault near here. Students quickly reworked the description of Grendel's Mere, 'after' the Old English.

Here's the Old English plus translation:

Here are six students' modern variations on the theme.

I
Knuckled tree roots grope
Mud and sea stones, slope to mire,
Will-o-wisps; dead things.
(By Kat Joplin)
II
There lies a few miles from here
A terrible fiery mere
Wolf slopes all around
It flows underground
And threatens even the deer.
(By Jeanie Abbott)

THIS IS NOT A PLEASANT PLACE!

First of all, this place was nearly impossible to find. I had to search over wolf-infested hills and nearly tipped on the dangerous footpath next to the mountain stream. I followed the stream next to mountain cliffs until it took me under the earth, where I finally found the mirror. It was overhung with old groves whose roots were so old and knotted I almost tripped again. And the mere itself was on fire! (Thought I couldn't tell if the fire was on the water or in the water. But I digress!) And I couldn’t even see to the bottom—some mere. I swear, if a deer were in these woods being chased by dogs, it would be eaten by them than come here.
And to cap it all, I was barely there two minutes before some crazy lady came out of the water and grabbed me and pulled me under. Not. Cool.


Under the cliff lies,
Not even the hart will go,
Lake of frost and fire.
(By Matt Aiello) 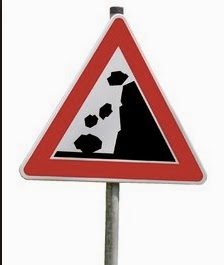 This land seals secrets under the wolf mountain, beneath the wind-wracked waveboulder. Do not dare that dangerous downpath where the cliffstream cowers under the crags.
(By Rukma Sen)

VI
There is a place, close to here,
Where water bubbles up in pools before it
Falls and crashes -
A moving landscape -
And cold.

There are noises everywhere of unknown sources
But a silent wind moves through the tops of trees
Which hold the water in their roots
And weave down into a neverending maze below.

There is no footing anywhere fit for men and
There are no paths for walking.
To move is to climb and fall and be
Submerged and to enter is to ask for death.
(By Bill Loundy)


Posted by Elaine Treharne at 9:49 PM No comments:

#Beow200: The Passion of St Christopher and The Letter of Alexander to Aristotle

After completing #Beow100, I set about tweeting #Beow200--the prose texts in London, British Library, Cotton Vitellius A. xv, the Beowulf-manuscript. #Beow100, when transliterated into this Blog, has had almost 15,000 readers, which is mind-boggling. #Beow200 can't expect a tenth of that, I suspect, and these numbers show the already-existing impact of the respective Old English texts on their readership.

Anyway, below, are the #Beow200 pair of texts that I tweeted. Of course, they read backwards, since I simply lifted them from Twitter: so begin reading upwards from the end. Courtney Barajas, a doctoral student in Austin, Texas, is in the middle of tweeting the Marvels of the East (as The Wonders of the East #WOTE), the other prose text in the manuscript. The Old English Judith is next and will be #BeowJ.


The End of The Letter of Alexander to Aristotle


#Beow200 "My friends cried, so we left & I write to you, Aristotle, as you'll feel joy at all I've done: the greatest king that ever lived."
"The Tree revealed no more of me, except that I'd be poisoned. It said my mother would die shamefully & my sisters would live long #Beow200
"I fasted after this news. I returned at sunrise to ask the Sun Tree what of my mother & sisters? I woke up the 300-year old bishop #Beow200
"It replied: 'Your life is done. You'll die in Babylon next year in a way you least expect.' I felt heart-sick, as did my friends. #Beow200
"A 10-ft bishop greeted us. He had pierced ears & was clothed in skins. Only naked, virginal thanes could approach the oracle trees #Beow200
"The Sun Tree replied in Indian that I'd rule the world, but never see home. When the moon rose, I asked the Moon Tree when I'd die #Beow200
"No sacrifices were allowed: no blood & no rain fell, but the Trees wept if eclipses came. I asked if I'd rule the world & get home #Beow200
#Beow200 "We stripped naked to approach. The Sun Tree would answer the most secret question when the sun rose & set; the Moon Tree similarly.
#Beow200 "I feared the men joked, but with 3000 men left to find these oracle trees. There, people wearing animal skins lived in a paradise.
"The men never came back. I sought the gods' favor. 2 old men told me of a Sun tree & Moon tree that prophesied in Indian & Greek. #Beow200
"We went into a plain & saw 9ft-tall hairy, naked women & men (Ictifafonas). We saw Cynocephali, who attacked us, so we shot them #Beow200
#Beow200 "We went through India. A moon-headed beast killed 2 thanes; we hammered it to death. Elephants attacked, so we set pigs on them.
#Beow200 "Then Porus befriended us, bringing gold idols; I tested them to ensure their worth. We sought more marvels so I thought to go west.
#Beow200 "And we marched, burdened by gold we'd plundered, tormented by thirst. I was given water, but I wouldn't drink if my men couldn't.
#Beow200 "We went inland, warned about snakes & beasts. We took 250 guides to the region of Patriacen, & they led us to where snakes were.
#Beow200 "King Porus had 16000 men; 400 turreted archers on elephants; a palace of gold, ivory, & gems. I, Alexander, now control all this.
"I should thank my Greek army, who've been with me all along. We beat the Persians in May; by July, we beat Porus, king of India. #Beow200
"Anyway, Aristotle, the world's astonishing. I already told you about lunar & solar eclipses, so here I'll reveal new true things. #Beow200
Today, #Beow200 will begin The Letter of Alexander to Aristotle, a rather strange travel narrative: a veritable Medieval @TripAdvisor

The End of the Life of St Christopher; Beginning of The Letter of Alexander to Aristotle

#Beow200 Dagnus visited Christopher's body, put soil & blood in blinded eyes, & was healed. Lauding God, he ordered all to convert. The End.
Christopher pleaded that those who named or prayed to him be saved. God said 'I hear you'. The saint died, having saved 48115 souls #Beow200
"Dagnus, you bloodthirsty fool, I'll die & be buried tomorrow. To re-see, believe in God, & put grave-soil & my blood in your eyes" #Beow200
#Beow200 St Christopher, declining to worship heathen gods, was tree-tied, shot by arrows for hours. None harmed him, but two blinded Dagnus
Amidst the fiery grill, Christopher stood, his face rosily abloom, & said: 'Ha! Your tortures cannot harm me!' Dagnus was floored #Beow200
King Dagnus ordered men to torture Christopher. 3 were to attack his head, but they saw his holiness & met their deaths for that. #Beow200

Posted by Elaine Treharne at 6:34 PM No comments: