Ethics and the Digital Archive

Stanford Ordinary People Extraordinary Stories (SOPES) is a new project I'm running within Stanford Text Technologies. It contributes more broadly to ongoing work on Digital Archives that seeks to uncover patterns detectable through machine learning (the NEH-funded 'Global Currents') or visualization (the Hewlett-Packard funded 'CyberText Technologies'). SOPES takes this work back to the level of the recovery of individuals' lives through traces they left in their own written records: autograph albums, postcards, photograph albums, letter collections, receipts, and other ephemera.

Within Amy Scheeline's autograph album that I bought at an antique shop in San Juan Bautista was a tiny envelope full of bits and pieces--remnants of her short life, it turns out. She died just a short while after receiving this autograph album as a present on her seventh birthday in 1884 from her 'loving Mamma'. 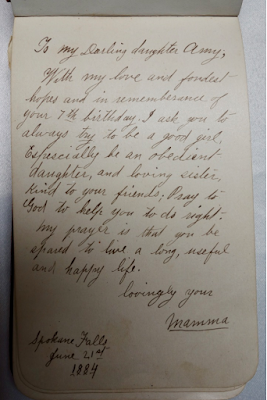 This envelope included sewing samples, a letter that Amy sent to her grandparents, a photograph, and Amy's death notice. 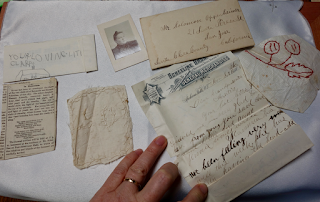 It turns out that this otherwise unknown person's life was, perhaps unsurprisingly, rich and fascinating. Amy's grandparents were Oppenheimers; the whole family was involved in mercantile enterprise related to the railroad expansion of the US West in the 1870s and '80s. Her uncle proclaimed himself the King of Mexico, and Amy herself was the first Jewish person to die in Spokane Falls, Washington. My student, Liz Fischer, who's from Spokane, sent me photographs and rubbings of Amy's grave. I feel as if I have the evidence of this child's whole earthly existence in my reach.

There's not much that would cause scandal or embarrassment to Amy and her family in these traces of her life. This material can be digitized and analyzed as a wonderful piece of socio-historical evidence. We could network her relationships; think about the family's immigration from Germany, and their subsequent impact on the western United States; evaluate the lives of well-off merchants in this period. I have few ethical qualms about the usefulness of this information being in the public domain.

Other ephemera, though, have made me wonder about the implications of SOPES and similar efforts to make available the lives of others through the digital realm. In one set of letters, datable to 1937-1945, which I bought for $39 in December 2016, a divorced woman's desperate efforts to keep herself afloat financially resulted--as the letters illustrate--in a life of frequent dalliances with men who might have been able to help her. She evidently had an affair with a man know to be a British spy; she struck up relationships with soldiers on their way to fight; she had a fraught relationship with her ex-husband; and she suffered from not knowing where her Austrian and Dutch Jewish family members were during the earlier 1940s. She went on to marry a much older man, whose life was so notable that he has a blue plaque at their marital home in Putney. Should all of these epistolary pieces of her life be made available now? None of those 100+ letters in my possession was intended for publication.

Last week, I picked up this small set of documents on EBay for about $50. 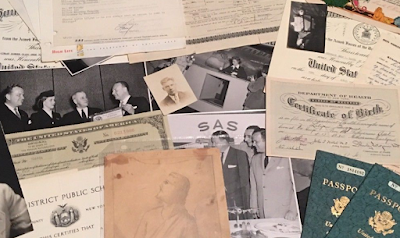 They include passports (now invalidated), birth certificates, marriage certificates, photographs, and honorable armed-forces discharge papers of a couple, both previously married. I cannot trace their children through cursory research. Should these materials, presumably acquired through a house clearance, be digitized and investigated? What are the dangers of this kind of documentation being in the public domain? Are there any dangers? The ethical implications of digitizing and making public family archives, small collections of ephemera, and, effectively, other people's lives are many. To whom does a researcher owe responsibility? How does one reflect the lives of those who were not likely to be among the literate, or among the documented? What about those who could not afford photographs, stationery, and the physical relic of being on record? Where do the morals in book historical, social and intellectual scholarship like this lie?

Celebrating Parker on the Web

Stanford Text Technologies' fourth Collegium focused on a celebration of Parker on the Web 2.0 (Parker Library on the Web), which was launched as an Open Access resource in January 2018. Hosted at CESTA by Benjamin Albritton, Georgia Henley (the main, and brilliant, organizer), and me, we had twenty-five speakers here at Stanford for three days, from March 25th to 28th, culminating in a Mirador workshop led by Ben. Our format was unusual; months in advance, we gave our participants a manuscript from Parker's collection at Corpus Christi College, Cambridge to work on, and each session paired up colleagues to see what, if any, connections could be made between the assigned manuscripts. Everyone was encouraged to tweet as #Parker2, so that our conversation can be discovered alongside tweets from the Parker Library's own #Parker2 conference held earlier in March.

The manuscripts described and analysed by our participants ranged in date from the sixth-century St Augustine's Gospels (MS 286, presented by Mateusz Fafinski) to the fifteenth-century Troilus and Criseyde (MS 61, presented by Sian Echard). We worked with Latin, English, Welsh, and French texts, focusing on materiality--paper, membrane, ink, bindings--and scribal practices, artistic signification, communities of readers, textual transmission, medieval pedagogy and pastoral care, the act of collecting, and modes of display and reception. Major themes emerged over the three days, though discussion of these didn't always elicit intellectual consensus. Some of these were highlighted on our whiteboard (including the semi-visible 'role of conservation', 'technology-in-practice', and 'making'): 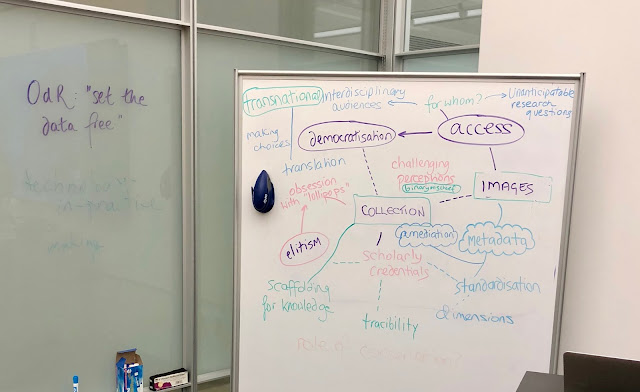 Many speakers noted the elitism and connoisseurship of book collecting and manuscript studies-- unfortunate modes of scholarship and commodification that result in a fixation on the 'lollipops' in the repository, the de luxe volumes and canonical, known-author texts. We had some of these on our list, too (Matthew Paris in MS 16 and 26, presented by Joey McMullen and Cat Jarman, respectively; MS 4, the Dover Bible, presented by Catherine Karkov; and MS 98, a scroll, presented by Anne McLaughlin), but the majority of manuscripts that colleagues talked about were the utiliarian, the everyday, as if such a category could really exist for these extraordinary survivors of the past.


Calls were made by Orietta Da Rold to "set the data free", or, as Alexandra Bolintineanu pointed out, for the Parker resource to be used to help expand the possibilities of scholarly investigation into medieval manuscript production that include a deeper understanding of the role of digital data in mediating these materials. Standardisation of repositories' metadata seems a major desideratum going forward, as does some effort to standardise the ways scholars describe features of manuscripts (especially script, as Peter Stokes demonstrated). As Erica Weaver suggested in her analysis of MS 422, 'deeply felt textual experiences' are as evident in our early literary materials as they are now, and whether in the flesh or on the screen, these manuscripts are as fascinating, moving, and compelling now as they surely were a millennium and more ago.

Thanks to Matthew Parker! Thanks to Corpus Christi College, Cambridge, Stanford University Libraries, and Cambridge University Library, and to all the teams, who have worked to collect, preserve, digitise and display these fabulous manuscripts. Thank you to Vice-Provost and Librarian, Mike Keller. Much gratitude to Georgia Henley, CESTA's Rani Sharma, Celena Allen, Amanda Bergado; Jon Quick, Peyton Lepp, Jeanie Abbott, and Max Ashton.