Elizabeth Dacre hidden in a book

The benefits of looking at books holistically, whether they are manuscript or print books, is borne out by my discovery in March 2010 of a Latin love poem written in the sixteenth century. While I was visiting West Virginia University to give a lecture at the invitation of Professor Pat Conner, I dropped into the university's Special Collections to examine some early books with an undergraduate class. The librarian, Harold Forbes, had kindly got out a sixteenth-century edition of Chaucer's Works to show me. I have always been interested in writing outside of the main text-block--marginalia, annotations, ex libris ownership inscriptions, and bits of paper stuck into books--and to my delight, there was a handwritten text pasted into the back board of the Chaucer edition. I could tell from the writing that this was a sixteenth century work, and astonishingly, a name 'Elizabeth Dacre' appeared pasted beneath the main text. I asked what it was, but no one knew, so I transcribed five or six lines to look up when I had finished lecturing. When I looked up the lines, they appeared nowhere. This poem, then, had never been seen since its rebinding into the book cover, never been published, and probably never been read in recent centuries. 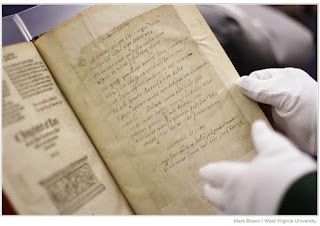 As it turns out, the poem was written by Lady Elizabeth Dacre, an English aristocratic woman (c. 1536-1567), to Sir Anthony Cooke, tutor to Edward VI, and father of the Cooke sisters--famous scholars in their day. The poem is full of love and longing, a personal lament for the 'tristis amor', the 'sad love', which seems to have been Cooke and Dacre's secret. The Latin poem is fourteen lines long and full of classical references to those who shared deep and silent passion, and it ends with a scurrilous Martial epigram. Evidently, Elizabeth took great care to preserve a fair copy, by putting it safely in the book of Chaucer's Works that she herself owned.

Despite her apparent love for Cooke--whether real or imagined--Elizabeth Dacre never married him and there is no record of their relationship. Instead, she was twice married: to the fourth Baron Dacre first; and then shortly after his death in 1566, to the fourth Duke of Norfolk, the most powerful of all the English aristocrats. Norfolk was ostensibly a Protestant, while Elizabeth was an ardent Catholic. She died in childbirth within months of marrying Norfolk, and during her dying moments while in labour, he refused to allow her access to her priest for the last rites. Her sad death at the age of only about thirty resulted in her subsequent loss to history--remembered only by and through her noble daughters Anne and Elizabeth. Since the late sixteenth century, then, she has been consigned to the footnotes of history, without even a tomb marking her passing. Now, however, with the emergence of this wonderful and personal piece of writing, and the sure knowledge of her classical education and her ownership of Chaucer's Works, something of this extraordinary woman has been brought to life. It goes to show that while we usually focus on the main contents of books, there can often be a great deal to be discovered hiding elsewhere between the covers.

Attributed to the founder of the 'vile' website, 4Chan, 'Anonymity is Authenticity' is a thought-provoking soundbite, worth considering in relation to text technologies, broadly speaking. I was first introduced to the phrase through a BBC Radio 3 podcast of 'Arts and Ideas' (http://downloads.bbc.co.uk/podcasts/radio3/r3arts/r3arts_20110627-1834a.mp3) in the summer, and was struck by the conversation in that discussion, where one of the participants talked about her multiple personae on various websites, and how these permitted her degrees of reality that depended on the nature and audience of the website. It suggested that anonymity permits a 'real' opinion to be given: a genuineness of critique; a 'truth' that the openness of authorship can erode (as if we all hide behind our names, afraid to own up to what we think). Anonymity is common in specific scholarly areas, particularly for reviews of book proposals to publishers; sometimes, this ability to remain anonymous leads to criticisms being made that the writers would baulk at stating publicly. Does this make the statements more authentic? Open-review policies now being trialled by some journals seek to ensure that any criticism is attached to the name of the writer. Will this make such criticism somehow less authentic (http://mediacommons.futureofthebook.org/mcpress/ShakespeareQuarterly_NewMedia/)?

On the internet, one might argue that anonymity preserves identity such that unpalatable truths can be made public. Here, the Wikileaks site, with its apparent attempts to reveal particular truths about government actions, seems an obvious contender for the accolade of 'authenticity', but, whose truth do these anonymous reporters tell? No utterance was ever uttered unfiltered; no information is objective, mediated by an author without an agenda. 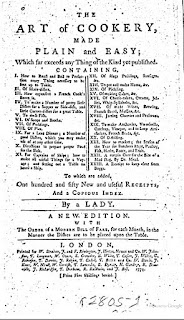 In past technologies, authenticity might indeed depend on anonymity, though, in the sense that particular authors, or kinds of publications, were frowned upon and censored. There are the obvious and very famous examples of the Bronte sisters, publishing under male pseudonyms to bypass public disapproval of female authors. Pseudonymous publication is a form of anonymity or, more usefully, disguise. Anonymity was often de rigeur in the eighteenth century, as in Hannah Glasse's case. In the twentieth century, it was discovered that she was the author of The Art of Cookery made plain and easy, published in 1747 by 'a LADY' (http://books.google.co.uk/books?id=xJdAAAAAIAAJ&printsec=frontcover&source=gbs_ge_summary_r&cad=0#v=onepage&q&f=false). Anonymity in this case might have been essential to ensuring the publication of the book, but it also led her being uncredited, which seriously disadvantaged her subsequent reputation and well-being.

In the case of Shakespeare's Bad Quarto and its variants, the anonymity of the title-pages (in comparison with the, literally, 'authorised' First Folio of 1623) has ensured these versions' derogation by textual scholars. In the case of some medieval authors, however, their elision within the text and total anonymity might have meant their works became authenticated by the authorities responsible for the dissemination of sequences of religious texts. One is mindful here of the anonymous homilies circulating in the Anglo-Saxon period, where the authorship of the homily in its multiple instantiations is supressed in order to highlight the major sources used (the likes of Augustine, Gregory, Jerome and Bede, who are explicitly named in the text as those whose writings are employed). In these texts, authenticity is not about the authorship of the original text, or that of the subsequent versions in successive manuscripts, but of the ultimate validity of the text through its use of Church fathers and scriptural quotation.

So, in text technologies, the issue of 'anonymity' being (or 'insisting on' or 'confirming' or 'enhancing') 'authenticity' is not remotely straightforward. It's certainly timely, though, to think through this virtual truism in its more general application to texts and their production.