The History of Text Technologies includes the history of music, from the earliest recorded works, which are predominantly monodic chants written into liturgical works through neumes, to complex multi-track recordings, to digital music, much of which can be composed and published without the use of a 'real' instrument. How the language of music is produced, transmitted and received is the business of the text technologist, and interesting parallels can be made between music and all other forms of text.

In the case of avant-garde musical text, there can be nothing more illuminating than John Cage's 4'33" (http://www.youtube.com/watch?v=hUJagb7hL0E), voted by Peter Gutmann as the most significant piece of classical music of the twentieth century: http://www.classicalnotes.net/columns/silence.html. Cage's work, composed in about 1948, illustrates most effectively how text functions, and how significant our expectations of a text technology are. In its printed form (a page of which is shown below) the word on the page, there in place of a musical stave, is 'tacet', 'it is silent'.

4'33", or the Youtube of it posted above, was played in its entirety to 185 students in two separate sessions: the first was to about 160 students in a large, wood-panelled, 1930s lecture hall where some light came through the large windows. The second was to fifteen students in a small seminar room with the lights out. Neither performance of 4'33" was remotely alike. In the first, the anticipation of music was palpable; the room was still--at least, it was still until the end of the first movement, when the coughing at the Barbican video was emulated by coughing in the lecture hall, and where one or two, previously silent, students began to whisper, changing the experience of the performance for their surrounding colleagues. Elsewhere in the lecture hall, there was continuing silence, bar the external noise from a busy campus. In the small seminar room, the awkwardness was much more evident; one student laughed out loud when he cottoned on to what was happening (or not happening, as is the case). Others' perplexed responses were emitted through movement or quiet sighs. 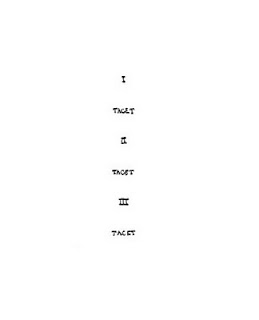 By the end of the performance, a small number of students was fidgety, though most were transfixed. The sound quality, the ambience and the level of attention were all absolutely different from one performance context to the other. Some students thought the whole thing was brilliant; others thought it bizarre. Joery Francois recognised that we had just created our own performance of 4'33"--that we were the instruments in the piece as it was played at 10.25am on November 15th 2011. This wonderful observation demonstrates perhaps more vividly than usual that each text depends on its audience, not just in the interpretation of the text, but also in its very creation. And the depth of the musical silence, its multilayered rendition in those classrooms can most eloquently be labelled (as John Nance labelled it) the consequence of an 'invisible thickness', a new way of describing how many of us access digital and recorded texts, whether these are televisual, auditory, or verbally textual.

Posted by Elaine Treharne at 7:18 AM 4 comments:

I've talked about the fear of the loss of the book as an object on this blog before, and with that fear, the commensurate alarm that we are witnessing the demise of the bookshop. Here's a column from The Guardian in March 2011, which lays out the view of an antiquarian book dealer: http://www.guardian.co.uk/books/booksblog/2011/mar/09/farewell-secondhand-bookshops?CMP=twt_gu What's particularly interesting here are the comments from various readers, one or two of which are silly, but the remainder of which illustrate effectively the nostalgia and emotion evoked by the book, and by specialist bookshops. Is it possible to be nostalgic for something that still exists?
Posted by Elaine Treharne at 1:29 PM No comments: 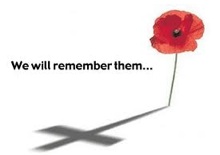 Text is not just comprised of words or even images; it can be inherent in objects. But whether word, picture, symbol or object, text is not semantically transparent. The slippery nature of the Sign is clearly evinced by the custom among many British people (for a number of decades now) of wearing a red poppy in remembrance of those who have lost their lives fighting wars. (It's sold on behalf of the British Legion, who support veterans http://www.britishlegion.org.uk/) In these times of democratic sensibility, poppy-wearing can elicit a silly and pseudo-liberal response like this http://www.huffingtonpost.co.uk/scott-hill/poppy-and-remembrance-day-fiasco_b_1085824.html, but on the whole the poppy is simply shorthand for the conscious and personal memorialisation of lives lost. In America, though, the wearing of a poppy is not part of the heartfelt Veterans' Day tradition, and I have worn a poppy this week to the bemusement of some of my students, a few of whom have openly wondered why I'm wearing a paper flower. It's not something they had come across at all. So, what seems so obvious and clear to me--a text symbolising national sadness at loss and admiration of courage--means nothing in another context, showing how all kinds of texts are, effectively, dialectal and socio-culturally contingent.
Posted by Elaine Treharne at 7:08 PM No comments:

In a book that is very much of its time, The Key to the Family Deed Chest: How to Decipher and Study Old Documents, printed in 1893 and still available, Emma Thoyts Cope (described in that book as an historian, genealogist, and palaeographer) commingles graphological aspects of handwriting with diplomatics and a superficial form of palaeography. This hybridity between the science of scholarly subjects and the subjectivity of handwriting analysis is confirmed when Cope makes an explicit association of handwriting with personal character or mood:

If the subject of handwriting as a test of character is carefully studied, it will be found that immediate circumstances greatly influence it: anxiety or any great excitement of any kind, illness or any violent emotion, will for the moment greatly affect the writing. From handwriting the doctor can hazard an opinion as to the mental state of his patient. In all cases of paralysis the writing is temporarily affected, and the patient is usually at first deprived of the power of writing […]. It is not strange, then, that with so many causes upon which it depends, writing should be an excellent test of temperament and bodily health […] [so that from it we can contract] a habit of forming conclusions as to the mental and moral caliber of the writers (pp. 15-16).

It may seem far-fetched to assume that one can tell the ‘moral calibre’ of a writer from their handwriting, but there’s no doubt that it’s as human an endeavour as one can imagine, and it’s one of the reasons, of course, that autographs and holograph copies of authors’ manuscripts are still so widely sought. In what seems to be an overwhelmingly digital world, it’s good to know that an appreciation for the handwritten artefact is still significant. This is admirably focused upon in Wendy Stein’s short video on manuscript culture, here: http://www.metmuseum.org/connections/writing#/Feature/
Posted by Elaine Treharne at 1:20 PM No comments: 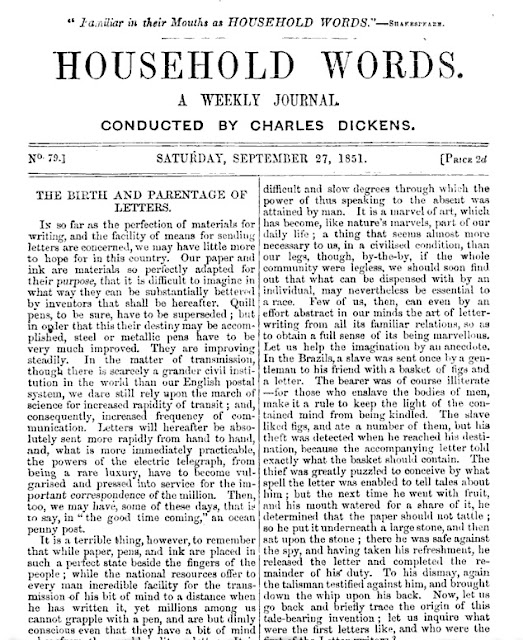 As we approach the bicentenary of Dickens' birth on February 7th, 2012, it's interesting to look back on what he had to say about his world at a time, in the mid-nineteenth century, when technologies were moving as fast as they are moving today. Inventions were being brought to the public's attention at a tremendous rate, and most involved rapid reproduction, cheaper prices for texts, and increased accessibility to 'knowledge', loosely put. Dickens contributed a good deal to the culture of his era, to contemporary debates about literacy, and he showed great initiative in producing novel forms for the dissemination of text. As the 'conductor' of his periodical, Household Words, which cost 2d (2 pence), he had a large audience of appreciative readers. And to these readers, he introduced his own potted history of text technologies, in his article on 'The Birth and Parentage of Letters', an essay that illustrates a keen understanding of the significance of tools and substrates throughout the centuries: http://books.google.com/books?id=e84nAQAAIAAJ&printsec=frontcover&dq=Household+Words&hl=en&ei=q1C4TsTwN4bMtgejyczxCg&sa=X&oi=book_result&ct=result&resnum=1&ved=0CDMQ6AEwAA#v=onepage&q&f=false.

As Dickens so poignantly points out on the first page, 'Our paper and ink are materials so perfectly adapted for their purpose, that it is difficult to imagine in what way they can be substantially bettered by inventors that shall be hereafter'. Well said, Mr Dickens. One can only imagine, though, how he would have embraced the potential of our brave new digital world.

Posted by Elaine Treharne at 1:45 PM No comments: