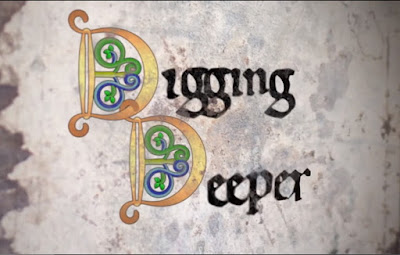 I’d like to offer some reflections on the experience of developing a massive open online course on medieval manuscripts. From 2014-2015, I got the opportunity to collaborate on the Digging Deeper sequence of online courses, initiated by Professor Elaine Treharne, with a crack team from Stanford University (which funded the courses, and hosts the material) and Cambridge: Drs. Benjamin Albritton, Suzanne Paul, Orietta Da Rold, and Jonathan Quick.

We launched Digging Deeper: Making Manuscripts in Winter 2015, and the second course, Digging Deeper: The Form and Function of Medieval Manuscripts, in Spring. I was the English Department Academic Technology Specialist at the time, and my role was essentially project management. This is a privileged position for this sort of project, because I got to work at the jointure between extremely disparate groups—academics, platform engineers, videographers—as they figured out how to collaborate in the service of a new kind of cohesive learning experience.
Digging Deeper is about how manuscripts were created, the steps in their development, their conservation; the longer I worked on it, the more I came to see MOOC production itself as a sort of echo, or descendent, of manuscript production. So, in giving an overview of this experience, I’ve tried the experiment of using the unit names of the Digging Deeper sequence, reappropriated here for their relevance to online courses.

Unit 1) How is a Manuscript Produced?
A MOOC, like a manuscript, is produced with great toil and striving. With great expense, and effort.  As a work of devotion. I find it hard to believe that MOOCs can be produced without people like the Digging Deeper course team, who have the passion and profuse intellectual energy to power through the work—to carry the inspiration for it intact through the welter of the actual process. In many cases, and certainly in ours, MOOC instructors get no extra pay, and no allotted time, to create the project. They have to do it out of love.
And the production is, as with a de luxe manuscript, corporate: lots of people, lots of groups; work goes on at lots of different buildings. Just for fun, a list of units involved: Cambridge University Library, Stanford English Department, Stanford Digital Library Systems and Services, and Stanford Special Collections, St John’s College Cambridge, the Vice Provost for Teaching and Learning, the Academic Technology Specialist Program, video production, graphics post-production, the OpenEdX platform team at Stanford, the EdX platform team at Harvard/MIT. It’s complicated. But it all has to come out simple and unified.

Unit 2) Where were manuscripts produced?
That’s easy: Palo Alto and Cambridge. In a week dedicated to filming, we worked in Cambridge in 2014, which was the bulk of the footage; but we also shot a good deal at Stanford in libraries and studios.

Unit 3) Manuscript Materials
I was frankly appalled the first time it was borne in upon me what was required to put a penmark upon a parchment leaf. The only similar revelation has been learning what real video requires. It has no more resemblance to shooting video of my kids on my phone than a Post-it note has to the Book of Kells. Aside from manuscript production itself, I know of no other type of media creation that requires so much—so much expertise, so much money, so much planning, so much work after you think the main work is finished; such insane attention to detail—I know of no other medium, save parchment and I guess stone, that is so unforgiving of error.
Also under “Manuscript materials” we could talk about the platform—but let’s class that under…

Unit 4) Practical Palaeography
A major component of Digging Deeper is learning and practicing transcription. And let me tell you: learning and practicing transcription of medieval manuscripts is not something that was envisioned as a primary use-case by MOOC platform designers. Indeed, the whole MOOC world has its genealogy in STEM, and we’re still very much in the process of adapting STEM tools to humanities ends. When we first launched Digging Deeper, we had a simple textbox for transcription; no underlining, no special characters (except math characters—thank you), to do transcription. It wasn’t good enough, but we made do. But the platform team at Stanford, working with the one at MIT/Harvard, were interested in what we needed here, and custom designed a new transcription tool that includes all the medieval characters that are required, plus underlining and other special features. So, a little bit at a time, and with serious help from CS-land, the humanities MOOC is getting there.

Unit 5) Cataloguing
As with medieval books, information indexing and retrieval is a major challenge. In Digging Deeper, the team shows medieval techniques of information sorting, and also takes us into the daunting world of current library cataloging. Behind the scenes, it transpired that one can recognize serious video production teams by the way they organize their files. And what has been interesting, and challenging, above all is the negotiation of cataloging systems between disparate worlds, and finding a larger system that accommodates them all. I could go on. But let me just say: do not organize a medieval manuscript project along a similar-sounding schema to that of the library that you are working at. I never again want to hear an exchange like: “Did we just film segment 2.1.5 onIi.2.11?” “No, I think this was 2.2.11 on Ii.1.5.”

Unit 6) Mise-en-page
The most obvious association for mise-en-page in a MOOC means riddling out how in the heck to configure these various elements—video, readings, text, assessments, discussions—onto the screen. Just like our medieval forebears (maybe because of our medieval forebears) we’re still there wrestling with fitting rectangles into rectangles.
But mise-en-page has another, more special meaning to me in the MOOC context. We have a segment in which Dr Paul shows a lovely compendium volume, CUL Gg. 1. 1, and observes the great virtues of a volume being carefully planned beforehand. We have another in which Dr Albritton shows musical notation, and in which the layout at the bottom of a page has collapsed—it’s all crammed in, no staves, just whatever works. Planning in advance. That turns out to be important in manuscripts as in MOOCs.
Unit 7) Preparing the Folio
Preparing the folio: folding, pricking, ruling. A lot of effort went into creating a straight, even, experience on a relatively flat page. The digital world though—with some fancy exceptions—remains an entirely flat world, and this has consequences. Showing folding: that’s tough. Getting a flat, even image of a manuscript page: that’s tougher. The page is three dimensional, and it is impossible to hide this in the precise pixel grid of the screen.
A special word on pricking and ruling, especially drypoint ruling. With good macro photography you can get great images of these, but it may take about an hour per image. It is exacting.  “I’m NOT taking any more pictures of pricking!” as our photographer said, still hangs in my mind as a key statement from the Cambridge trip.

Unit 8) East and West
In Digging Deeper, East means Arabic and Chinese manuscript traditions. But to me, East means Sacramento. Cambridge is definitely the Far East. Digging Deeper was very much a worldwide effort.  There are amazing benefits to this. To name just one, our ability to respond to questions in the online forums. As Dr. Paul observed: “It's all about timings - between us we've pretty much got 24 hour coverage.” But there are also cultural conflicts. And I would just urge my fellow Americans to stick to your principles: there is no “u” in color, nor is there an “s” in digitization.

What happens next? There has been such a rush on to produce MOOCs in the last few years that it seems that no one has really thought through the eschatology of the thing. What comes next? It would be appalling to just dispose of the material once we’re through, or even just to push it into reruns. There are the materials of course—the videos, the online learning resources, and whatnot—those shouldn’t just be ditched. But far above that is the community—the community of scholars, librarians, researchers, novices, and like-minded souls the world over who have made these courses work. So, shifting into the next stage of the project, that community is, I think, what we want to keep together and help to grow.

The Last Unit: 10) Digitization
The last week of our second course it on digitization. In Digging Deeper, digitization means primarily rendering digital photographs of manuscripts on the internet. But Digging Deeper is, of course, itself digitization. So throughout the process we’ve had to think very carefully about what this kind of digitization means, how it works, what its aim is. I remember clearly, in a big room at Cambridge stuffed with camera equipment and with us all swirling around, and in the middle, holding the stage silently, a large manuscript—like in the Frost poem, with the secret which sits in the middle, and knows. What is this all about? Making slick video? Designing a fun interface?
I’ll close with the example of our section on Practical Paleography—that is, the transcription component I mentioned earlier. The exercise here is simply looking at a manuscript on the screen, then transcribing it with a pencil, then typing it onto the screen to check your transcription. I have to tell you that, not being a medievalist, I had no idea why we were doing this. Twenty years ago, OK: you needed a way to be able to draw and transfer information about the manuscript without taking the manuscript itself. But now that we can mostly capture this stuff with smart phones, and that more and more of it is online, what’s the point? I plucked up the courage at one point to ask. And the answer was interesting. It was, in essence, “If you don’t do this painstaking task, then you’ll never learn what you’re actually looking at.”
The dystopia of digitization, I think, is lots of images being created and passed around like Bitcoins, without anyone ever really knowing what they’re worth or what they mean. The utopia, or simply the way forward, is using digitization to focus attention better, more clearly, and for more people, on that central experience: one person concentrating on one page, and working to understand what it means.