In protest at 'Anonymous', the film just released that suggests Shakespeare is not the author of the plays we associate with him, local people in Warwickshire (Shakespeare's birth county in Britain) are protesting by unmemorialising him; that is, they are removing his name from signs: http://www.bbc.co.uk/news/uk-england-coventry-warwickshire-15440882. This rather odd reaction is the antithesis of putting up a name plaque or commemorative monument, presumably, though it's hardly a convincing erasure--the same as might be said for the film, in fact.
The attempt to erase Shakespeare or a well known figure from history, more generally, is attested to in the titlepage of the Great Bible, commissioned by Henry VIII in the 1530s and published in 1539, with subsequent editions within the following couple of years. Thomas Cromwell, Henry's Chancellor, appears in the first edition on the left hand of Henry (in the top register) and his coat of arms appears to the right of the title text. After Henry had Cromwell executed in July 1540, the coat of arms was removed from the titlepage, leaving a circular emptiness that is arguably more noticeable than the coats of arms would have been. In removing the heraldic device of Cromwell, his entire legacy seems to be rubbed out. Similarly, the striking out of Shakespeare's name on roadsigns today ironically draws attention to the presence of the name, and to the obvious significance of William Shakespeare to Warwickshire's history and its tourism industry. 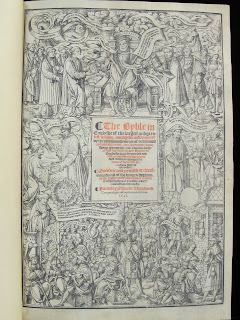 And on titlepages and the way in which they developed over time, a great exhibition (outlined here http://www.nga.gov/exhibitions/2010/title/slideshow/index.shtm) was held last year which shows the ways in which this most important, but overlooked, information retrieval tool changed up to the early twentieth century. From the fabulous, authorless, propaganda of the Great Bible titlepage to William Morris's elegant, Roman, titles, this part of a book's history tells us, in a nutshell, the content and agenda behind a book's production, yet we seldom spend time looking at this part of the book in our hurry to get to the 'text'.
Posted by Elaine Treharne at 1:56 PM