As a family (husband, two children, two dogs, one cat), we very recently drove across America, so that I could take up my new post as Professor of English at Stanford University, south of San Francisco. Our 2,600 mile journey along the I-10 and up the I-5 from Tallahassee, Florida to Stanford took five days, my husband and I each driving a car. I drove the thirteen-year old Honda CRV, adding considerably to its 111,000 mileage and I had the pleasure of my son's company, together with that of the two dogs.

As we made our way cross-country, taking in West Florida, Alabama, Mississippi, Louisiana, Texas, New Mexico, Arizona and California along the way, I became deeply conscious of the ways in which we can read the landscape, both through its natural splendour and through the ways in which it has been colonised by modern American society. I'm sure it's very last century to think of everything as potentially interpretable--that is, potential text--but still, as I say, I was struck by what I could read about this vast country, simply by passing through it. So, this blog and the next few will focus on the things we saw and how these might signify something or other. I'll do this through a sequence of selected superlatives, beginning with the weirdest sight (of many weird sights).

Driving through Eastern Arizona from New Mexico to Tuscon was a sequence of unpredictabilities: skirting desert thunderstorms, but nevertheless being rained upon; high-ish mountain transforming into bouldered panoramas; and soldier cacti standing in battalions on hillsides. Together, these created a visual smorsgabord. It quickly became our favourite few hours in the cars and there'll be more on these sights later. Leaving Tucson, though, we saw the oddest thing; so strange was it that it demanded a rapid set of double-takes, and shrieks of 'Get a photo! Get a photo!' On our right on the westbound I-10, a few miles outside Tucson, was a six-foot (?) cardboard baby sitting in the desert with a cardboard tractor. Like some kind of bizarre mirage, this strange vision of a child at play was utterly incongruous, totally out of context, a doodle literally marginal to the road that demanded to be interpreted, but provided no clues about its purpose.

Unfortunately, the photograph we took really can't capture the weirdness of this prelapsarian baby scene: 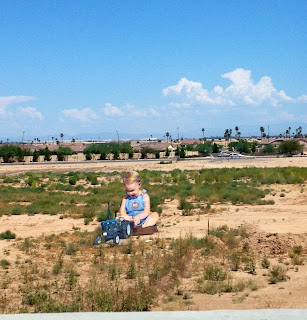 There is no explicatory sign, no interpretative board. It suggested vulnerability: a warning, perhaps, that in the desert, the helpless will die? Or was it a billboard for some advertiser, where the text had falled into disrepair? We wondered for some time what this could possibly intimate. When I mentioned it to my husband, who had been driving right in front of us, he confessed he had not seen it at all (eyes on the road, rather than gazing around: good driving). Yet, of course, the board baby is easily found through a Google search using the terms 'giant baby I-10 Tucson'. On this site (http://www.roadsideamerica.com/tip/2411?offset=5), I discovered the baby is not six-feet tall; rather, it is TWENTY feet tall. The lack of any proportion or perspective is such a great trick enhanced by the desert setting. Moreover, it is not some strange, dilapidated act of a tractor company; it is the work of the mural artist, John Cerney, completed in 1998 (see http://www.johncerney.com/photogallery.html). I might add that in the image on Cerney's website, you can clearly see a now-missing farmer running away from the baby. The work was originally intended to act as a marker for an educational farm situated just off the interstate. The farm was closed in 2004, so now the marker has nothing to mark; the referent has no reference; signifier without signified. Half a sign. Instead of indicating anything, then, the big baby just sits there, surprising interstate motorists and begging observant passers-by to try and describe what on earth they think they've just seen.
Posted by Elaine Treharne at 5:14 PM